Williams Village East is a Shining Example of Sustainability

Williams Village East at the University of Colorado Boulder is a shining example of sustainability, with a dedication to student privacy and a focus on building community.

Proudly welcoming its first student residents in August 2019, the university’s largest residence hall at 178,000 square feet was designed and constructed to keep pace with enrollment growth and address the growing demand from upper-class students to remain in campus housing.

The seven-story hall was designed by St. Louis-based architectural firm KWK Architects and architect-of-record alm2s of Fort Collins, CO. The building features a number of sustainable elements, while taking into consideration the unique needs and desires of the university and its students.

Williams Village East was designed to achieve a LEED Platinum certification by the U.S. Green Building Council, the highest possible rating for leadership in energy efficiency and environmental design. Many of the hall’s energy efficient features focus not only on saving energy and reducing costs, but also encouraging students to be energy conscious in their daily lives.

Williams Village East features numerous, large windows that highlight the campus’s impressive outdoor landscape and let in natural light, plus skylights with electrochromic glazing that adjust their shading automatically based on the time of day and the season to save energy and reduce utility costs for the university.

Windows in the student rooms feature magnets that shut-off heating/cooling systems automatically when the windows are opened, and a vacancy sensor in each room turns off the lights and controls the heating/cooling levels when students leave the room. A black switch in each room conserves electricity by automatically turning off “phantom loads” - electronics that are left plugged in when not in use. Green Outlet, an app for tracking energy use and estimating electrical bills is also utilized at Williams Village East to gauge which appliances are using the most electricity and when.

The hall’s Variable Refrigerant Flow (VRF) HVAC system relies on refrigerant alone instead of a water-based cooling system which makes it more responsive and adaptive to outdoor conditions. Since a VRF system doesn’t use ducts, rooms are equipped with a wall or ceiling-mounted indoor unit to distribute the air and allow users to make heating and cooling decisions based on conditions in each room or space. With its inverter compressors, a VRF system’s compressor motor can run at variable speeds which also makes it more energy efficient.

Other renewable energy features of the building include solar panels, LED lighting, recycling stations, thermostats in each student room, automatic door closers, and plastic panels on the stairwells made from recycled milk jugs.

Sustainability also plays a role in building community at the hall by grouping floors into sustainability teams that compete to use the least amount of water and energy. Winning teams earn community reward parties throughout the semester.

Community wellness at Williams Village East is promoted through the building’s unique wayfinding graphics which highlight local Boulder nature destinations. Each destination is also mapped-out on a full-scale wall map in the first-floor game room to encourage students to get active and seek out the featured destinations.

Another way community and student interaction are promoted at Williams Village East is through the main level great room which features a community center staffed by students 24/7 and includes a full kitchen and living room area, plus a space dedicated to gaming with 84-inch flat screens hooked up to Sony PlayStation 4, Xbox One and Nintendo Switch gaming systems. Students can also plug their own laptops and towers into the building’s network for gaming tournaments in the space.

Around the building’s exterior, plants native to Colorado are used in the landscaping to help reduce the need for watering and a pond that uses ditch water from snowmelt saves the campus an estimated 13 million gallons of water per year.

For a virtual tour of Williams Village East, click here. 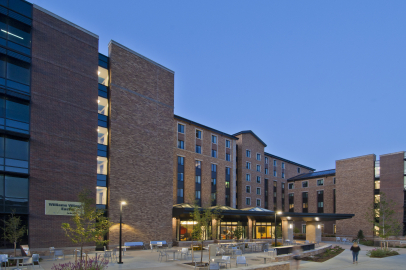