When Baby Boomers left home for college, they were sternly warned by their parents not to waste time playing cards in the student union. Fortunate kids of that era may have had a small television for their living space, but the Internet was just a futurist’s dream. Today, children of the Gen X generation leave their homes completely wired for technology, packing up their PS4s and an average of seven devices and expect to be able to continue their gaming and online activities while away at school.

Everything has evolved toward high-tech in today’s learning environments, and student housing must keep pace. Majors have been created with gaming theory and design in mind, and scholarships are offered to student athletes who excel at esports. In fact, the National Association of Collegiate Esports awards millions in scholarships each year. And the Olympics are considering esports as a demonstration in the 2024 games.

Today’s students are encouraged to play games as a way of bonding with others and supporting their school’s teams. In addition to scholarships offered for participants, students can follow esports in person in arena audiences and through live feeds of competitions. Games such as Fortnite, which staged a World Cup that awarded $100 million in prize money to top players, are as important to many students as an NCAA sport was to their parents. The games Call of Duty and Overwatch have World Leagues. League of Legends and HALO players can aim for participating in World Championships.

With esports on its way to becoming the next football league to today’s students, and recreational gaming a given, student housing must take both the casual and avid gamer’s needs into consideration in its design. So, what does a contemporary student housing facility need to have to make the gamer comfortable and happy?

It’s important to keep students engaged with each other. So, today’s housing space has to offer communal areas where gamers can join forces to experience play and establish connections with others. Those common areas need to be developed alongside thoughtfully designed individual living spaces.

Common areas and student rooms must be equipped with high-speed Internet service and reliable Wi-Fi. Offering service with very little downtime is extremely important; designers want to ensure there are no dead spots in their coverage area within the residence hall. Numerous electrical outlets and USB ports are also essential in student housing design, both in common areas and individual rooms.

Specifying the right furnishings and creating a gaming-friendly environment should be a priority as well in designing the perfect student gaming space.

Comfortable and easily movable furniture is essential. Whether it’s for gaming or for studying together, students want to be able to form pods with their sofas and chairs, adjust walls to right-size their space and plug in or charge up wherever they are playing or studying.

Furnishings and equipment that accommodate the gaming student should also extend to common areas as well. The co-working or gaming space should ideally be outfitted with large-screen, wall-mounted monitors and students should also have the ability to darken a gaming space, an important detail to many players.

KWK Architects has created space perfect for gamers and community at one of its most recent projects, the new Williams Village East residence hall at the University of Colorado Boulder. The building’s first floor features a gaming area with a large, wall-mounted television hooked up to a Sony PlayStation 4 and Nintendo Switch, plus an area with other traditional recreational games such as ping pong and pool. The space also features round tables with chairs and a large, sectional sofa surrounding the television that can be reconfigured to meet the students’ needs. The residence hall was completed and open to students for the fall 2019 semester. 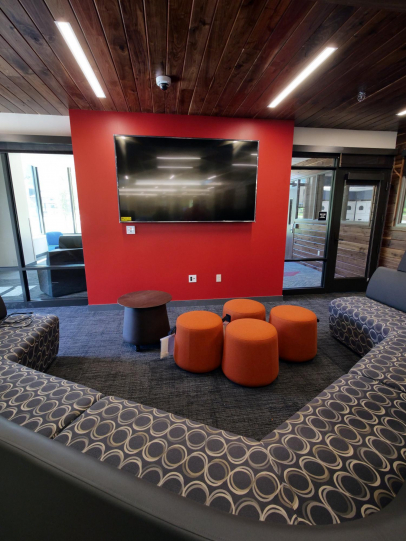