Any new construction project on a college or university campus is a major financial investment, and it is in the institution’s best interest to design a new facility to be flexible to allow for its fullest use and to maximize fiscal investment, say the design experts at KWK Architects. This certainly holds true for new residence halls; while their primary mode may be living quarters for students during the academic school year, their secondary mode and equally important use is during the summer months when they often house non-academic groups such as sports camps or conference groups.

With informed planning, a new residence hall can be a multi-mode facility and be used successfully for both the traditional academic-year use and for short-term summer stays.

“It is important if you plan to use your new residence hall as a short-term stay facility for summer conferencing or summer camp attendees or another similar use that you have discussions early on with the code authorities and your architect to clearly determine how to approach this dual use classification in the facility’s design,” said KWK Principal Paul Wuennenberg.

In addition to life safety issues, there are some programmatic design considerations for summer conferencing or camp attendees.

“These groups often arrive at the hall during a much shorter time frame than full-year occupants and need to be able to register more quickly,” said Wuennenberg. “In order to accommodate this sped-up process, a front desk or station with ample counterspace and adjacent, large queuing space is needed to efficiently facilitate registration. In residence halls without a front desk, a satellite desk, which only opens in summer months, can be provided to meet this need.”

KWK Architects utilized a flexible approach when it designed the University of Missouri’s new Brooks and Bluford Halls in 2016 and 2017. Given their proximity to the athletic field, the new residence halls were designed with summer sports camps in mind.

“The two halls are served by the front desk staff in Brooks Hall during the school year, but in the summer, a second desk is opened in Bluford Hall to facilitate sports camp attendees. The lobby in Bluford Hall was also designed to accommodate lines of people with a satellite front desk that becomes part of the mailroom during the academic year,” said Wuennenberg.

The dining center in Bluford Hall was also designed with summer campers and conferencing in mind. While the dining center is on a micro-restaurant format where customers pay for their selections at each of the six venues, in the summer the center converts to an all-you-care-to-eat format for the campers. A decorative screen in a tiger motif, the campus mascot, allows the center to use its grill venue as the main food hall for the campers. For breakfast, the opposite end of the dining center is opened with breakfast foods served from the coffee-house style venue. A separate Starbucks store, conveniently located off the main promenade between the two halls, provides retail food purchases as well. 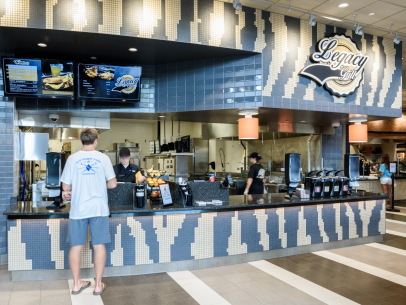